Lets Talk About Them
3945
post-template-default,single,single-post,postid-3945,single-format-standard,bridge-core-2.8.4,unselectable,qode-page-transition-enabled,ajax_fade,page_not_loaded,,qode-child-theme-ver-1.0.0,qode-theme-ver-26.8,qode-theme-bridge,qode_header_in_grid,wpb-js-composer js-comp-ver-6.6.0,vc_responsive

Lets Talk About Them

30 Jun Lets Talk About Them 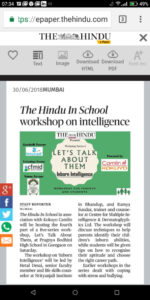 “Let’s Talk About Them” a parenting session organized by The Hindu In School , powered by Camlin Kokuyo, with Nrityanjali as the Goodwill Partner and CFMID Limited as the Technology Partner was hosted by Pragnya Bodhini High School, Goregaon, in the western suburbs of Mumbai. The weekend was marked with full attendance by parents of the students studying in the VIIIth and IXth Standard of the same school. The major factor which drew attention of the parents to attend this 1st of its kind event was, “How they can understand the uniqueness of their children better?”
Seema Shaikh, Principal, Pragnya Bodhini High School delivered the welcome address. She was so touched by the subject of Inborn Intelligence that she remembered about Mr Nagaraj, the 1st topper of the school’s first batch of Xth Standard almost 4 decades back. Nagaraj had secured 71 % in Standard Xth. Years later, Mrs Shaikh was overwhelmed to know that Nagaraj is now a leading medical practitioner in the United States of America.
The reason what prompted Mrs. Shaikh to share this example to the parents today through her address was to highlight only one major factor. Her objective was to caution the parents to not follow the rat race of securing high scores but instead develop the child based on her / his inborn intelligences. This factor alone would help the child to a great extent to lead a successful and happy life.
The passion and dedication of the school management in enabling “The Hindu In School” to disseminate this crucial information to parents through expert speakers was evidently visible. Members of the top management of Pragnya Bodhini High School, Chirag Shaikh – Chairman, Chottu Shaikh – Management Trustee, Anjum – Head of Creative Teaching Initiatives and Sunil Patel – Head of Secondary Section along with the school teachers expressed immense keenness to host this parenting seminar.
The first speaker for the day was Hetal Desai, a senior faculty member and counselor of Nrityanjali for Life Skill and Teachers training programmes in schools for over 12 years and is a corporate trainer for last 8 years under the guidance of Founder, CMD – Dr.Tushar Guha – the first person in the world to be conferred doctorate in personality development from USA..
Hetal Desai touched upon the topic of understanding the child’s inborn ability and why it’s important to understand and nurture the same at an early age. One of the most touching examples out of her personal experience, did emotionally move the audience. She was sharing the story of a girl named Pooja, a resident of Sangamner, a rural town on the outskirts of Nashik. Decades ago, Pooja’s parents had just built their new home and during the house warming ceremony every member of the family was contributing their efforts to conduct the event in a grand manner. Pooja who was just 8 years old then, decided to choose a newly painted plain white wall of one of the rooms of the new house and started drawing on the wall using her crayons. When Pooja’s father saw this, instead of reacting in a negative manner, he just motivated the child and brought her some papers and asked her to draw. Next day onwards Pooja started drawing with crayons and she did that for almost a week, until such time she was able to choose her best painting from the lot. Her father, during the day of the house warming had promised Pooja to frame the painting, which she would select on her own, gift it to her father and he would display it in his office. After a month when pooja went to her father’s office she was so motivated to see the painting neatly framed and displayed at a prime location in her father’s cabin. This one incident actually created a pathway for Pooja moving on to become a renowned Design Engineer, who is professionally well settled in Europe. Hetal Desai went on to say that this journey from a small town Sangamner to magnificent Europe just didn’t happen by chance. It was “positive parenting” which laid the foundation for this journey undertaken by Pooja.
Vaishali Wavekar, B.O – Municipal Corporation of Greater Mumbai , P/S, P/N Ward also managed to spare few minutes for this event and addressed the parents on how they can use affection in a very effective manner to nurture the child.
The last session was delivered by Ramya Sundar, Promoter and Senior Counselor, CFMID Limited

CFMID Limited works in the area of education management. Ramya Sundar has been conducting Teacher’s Training workshops in Schools and also undertaking Parenting sessions across India.
Ramya shared insights on the theory of Multiple Intelligence derived by Dr Howard Gardner,a renowned American developmental Psychologist from Harvard University. The theory states that each child possesses 9 multiple intelligences, viz, logic, language, naturalist, visual, body kinesthetic, musical, interpersonal, intrapersonal and existential. The emphasis of the talk by Ramya was, why it is important to understand the top Multiple Intelligences and how every individual can work effectively on developing self based on their top areas. Few striking examples did raise many eyebrows of the parents seated amongst the audience. To share a few, what if Sachin Tendulkar was asked to just study and not practice cricket ? ; What if A R Rahman was asked to play cricket and not to get into music?. The session did create awareness amongst parents that not to follow the rate race and to choose the subjects for career development based on multiple Intelligence and inborn personality instead of one’s own trial and error . Ramya shared the concept of Dermatoglyphics , a study of fingerprints for brain mapping and how a child’s inborn intelligence, learning style, abilities and areas of improvements can be effectively mapped.
Each one of the sessions did share loads of information on Inborn Intelligence and how to identify and nurture them . This was the key takeaway for parents of Pradnya Bodhini High School who attended this seminar. This has only inspired the parents to undertake a conscious parenting approach when it comes to their child’s development and advancement in career.
The Hindu In School is dedicated to spread this message across the parents community through such school connect programs during the days to come.